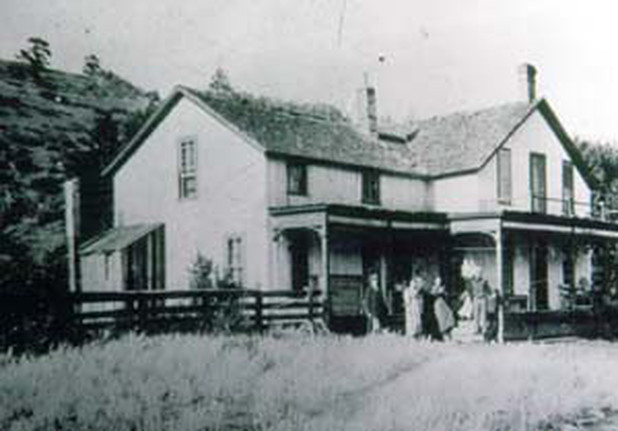 Rustic Hotel
On the flats near the convergence of Seven Mile Creek and the Poudre River, Samuel Beckley Stewart built a hotel that he named Rustic in the winter of 1879. The lumber for the hotel's construction was sawed out on a sawmill that Samuel had built at the top of Pingree Hill. William Burgess wrote in the Fort Collins Courier about the sawmill which he thought would be the nucleus of a township that he named Roseville. In the same article he named Mr. Miles as the foreman for the construction of the Rustic Hotel.
Samuel was an entrepreneur who help develop the Poudre Canyon, LuLu City, Teller City, and Larimer County Colorado. He originated a stage route between Fort Collins, North Park and the mining towns. Part of this route was a toll road that Stewart financed the construction of which allowed the transportation of merchandise to the new mines from Fort Collins which helped the small business men of Fort Collins. Stewart’s route left Fort Collins following the Poudre westward to the foothills, north to Livermore Park westerly to Manhattan Colorado, then down Three Mile Canon to the Poudre, up the Poudre to Longs Draw then southerly over Poudre Pass down the Grand River to Lulu, over Thunder Pass into Teller City. ( Three Mile Canon was renamed Pingree Hill in honor of George Pingree. )
In addition to having a stage route, hotel, toll road, Sam obtained a contract from the Union Pacific Railroad to provide railroad ties. He hired large crews to harvest the timber along the Upper Poudre River, Sheep Creek, Joe Wright Creek, the Big South and around Chambers Lake. Stewart's wood boss was Mr. Ward. It was cheaper to have railroad ties hand hacked than sawn on a mill.  His son Arthur (Art) was in charge of the stage.
Samuel Stewart and others formed The Denver Salt Lake and Pacific railroad company which proposed the construction of a route up through the Poudre Canyon west to Ogden Utah where it would connect to the Union Pacific railroad. The Union Pacific railroad assumed the assets of the company and hired Samuel to start work on the route up the Poudre. Samuel had a crew of men working on the route in the winter of 1880, they widened the area by Poudre Falls and built a tunnel near the mouth of the Poudre Canyon.

The May 3, 1881 issue of the Fort Collins Courier tells about  Mr. Stewart ‘s commendable work on the road to the mines  at LuLu City , Teller City, and North Park, providing people with a ‘splendid’ road. The same article includes a sketch of the Rustic House.


The Rustic is the only full-fledged hotel we have yet up the Poudre. It contains sixteen finished rooms, all neatly furnished, and is in the good hands of Mr. and Mrs. Stewart having charge in person.
( from a article in the July 26, 1883 issue of "T

The federal government issued a patent deed on the 160 acres surrounding the Rustic Hotel to Samuel Stewart on January 30, 1885. Due to poor snowpack in the high country and the resulting poor runoff  in  the winter of 1881-82 Mr. Stewart failed to fill his tie contract with Coe and Carter Co. who was the primary tie provider  to the Union Pacific Railroad. This resulted in Samuel having to borrow $3,000.00 from Eber T. Dunning. Mr. Dunning took possession of the Rustin Hotel in June of 1885.

“Norman Haskins is dead in Denver. Death came to him on Monday night from an attack of pneumonia and at his bedside were his daughter, Mrs. Luthe and T, J. Montgomery of this city, who was the local business agent for the financier.

The death of Mr. Haskins is a blow to this city, as he had contemplated doing work which would prove of immense value to Fort Collins and vicinity. It remained for Mr. Haskins to discover the mother vien of the gold ore in the Manhattan District for which scores of men searched for years and many thousands of dollars were expended. More than one man gave every cent he possessed in his search for the elusive fortune and there were others who contributed to funds to aid this search. It was through investments that Mr. Haskins came to Fort Collins and established himself at the Rustic. He was interested in one of the many mining and milling companies organized to operate in the Manhattan District. Ore of value was owned by his company, but in order to refine it considerable cost would be involved. He came here and was so attracted by the climate and his love of the mountains caused him to purchase the Rustic and much of the surrounding property. He devoted his time to hotel improvements, electric lighting, piping water to the hotel, planning trails into the mountains for hotel guests and taking up matters which kept his min=d off of extensive interests in Des Moines and Chicago. Last summer he had men working in a pit at the river bank near the Rustic to install a water wheel to furnish more electricity for the hotel. The rock brought out proved to be fairly rich in gold. Further investigations resulted in unearthing what was said to be the mother vein, the search for which gold hunters had spent years of their live. Business experience caused Mr. Haskins to go slow in planning the development of his property. He had sufficient means to take care of the project and expected to start work this summer. He was not given to boasting or making predictions, nut said that in time his property would be of such a volume that the Poudre Canon road would build itself.

Only a short time after the gold vein was discovered, Mr. Haskins passed his 84th milestone, but he was hale and hearty and expected to live many more years. He hoped to live to see Rustic a mining center and Fort Collins a large city. During the fall he seemed to fail in health and often remarked that he was not feeling extra strong. He made numerous trips between this city and his home in Rockford Ill. He was in Denver working up plans for his mining operation when he was seized with pneumonia. Death was not long delayed.

Mr. Haskins was regarded as a millionaire philanthropist in his home city, Des Moines, and was one of the oldest residents of that city. “

Norman Haskins spent around $10,000.00 on improvements to the property and another three thousand dollars on a trail and pipe line from Rustic to Mineral Spring. He believed that the foul water from the springs was a good tonic.

Mary, Norman’s daughter operated the Rustic for six years, she had the deed transferred to Mary Holland on January 19, 1917. Miss Holland ran the Rustic until she sold it to W.J. and G. Alice Richardson on May 26, 1931.

The Richardson’s made numerous improvements to the business during the years they owned and operated it, built new cabins, improved the electrical generation system and ran a successful operation. They sold the business to John Christian an May 31, 1945, who traded it to Melvin Barhite. Charles and Iva Frost bought the business on June 23, 1947.  This operator remodeled the old hotel, adding amongst other improvements a fire place.

W.P. “Pink” Davis and his wife Velma bought the business on  July 18,1951. They ran it until they sold it to Gene Barker on June 2, 1958. Gene leased out the business several times, once to Wayne Hageman and another time to Easy and Ester Pickens. The business was sold to Vern Galloway and Frank Cain on November 12, 1963. The Galloway’s sold their share to the Cain’s on September 29, 1966. In 1969 Gene Barker reposed the business and was awarded title on March 5, 1971 by a court decree. Gene sold the property to Sattler Enterprises. The old hotel was condemned and demolished on August 6, 1978.
Berdena Satter, heading up the Sattler Enterprises made several changes to the Rustic. Converted the old living quarters into a dining room, adding a bar and liquor store, and improving the guest cabins.
Sadly in the early morning hours of June 1, 2008 the Rustic caught fire and was completely destroyed.
An sad end of an era in the history of the Poudre. 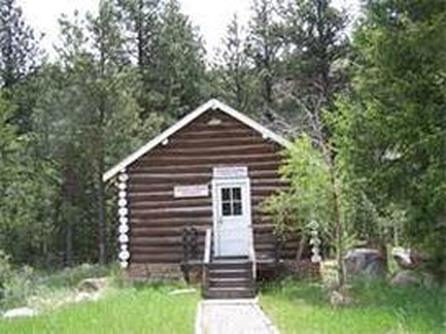 Eggers School shown at it's new location.
I had the pleasure of going to school in the school house above,
taught and mentored by Mrs. Ethel Straight.
An act of congress in 1912 set aside 1,600 acres of land to Colorado A&M Collage (now CSU). After lots of discussion on the matter the collage decided to accept the land in one piece in the area known as Pingree Park. To access this wonderful area a better and shorter road had to be built, in 1921 construction of the road from the Poudre River to the park was started. At the time there was talk of extending the road to Estes Park.

In 1922, Fred and Alma Eggers believing that there was a good potential for a business near the junction of the newly completed Poudre road and the road to Pingree Park applied for and was granted a Forrest Service 99 year lease. Fred started building a home, gas station and a store.  They also applied for and was granted the designation for a Post Office, which opened for business on April 23, 1926.

In 1935 the Eggers sold the business and Post Office to Goldie Claypool. The Claypool’s had been working as cooks at the Forestry Camp in Pingree Park, Goldie’s husband Carl got sick and was taken to the Veterans hospital in Cheyenne Wyoming.

In 1941 the Poudre Canyon road was widened, the forest service had the store buildings removed. The post office was run by Alma Amey until it was closed on April 30, 1944.

The little mountain town of Eggers which boasted of a store, post office, school, gas station, and 12 residences diminished to just the school by 1948. The school house was moved up the canyon in the 1960’s. All that is left now are a few foundations, a apple tree and tons of memories. 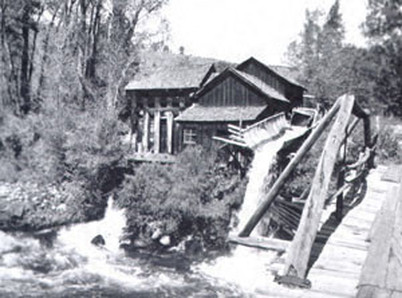 The hydroelectric power plant that Norman Haskins had built. This is where the vein of gold mentioned above was discovered. I wonder why the vein was not developed?
My dad Charles Lamar dismantled the plant, scrapped and sold the metals from this plant in the early 1950's. 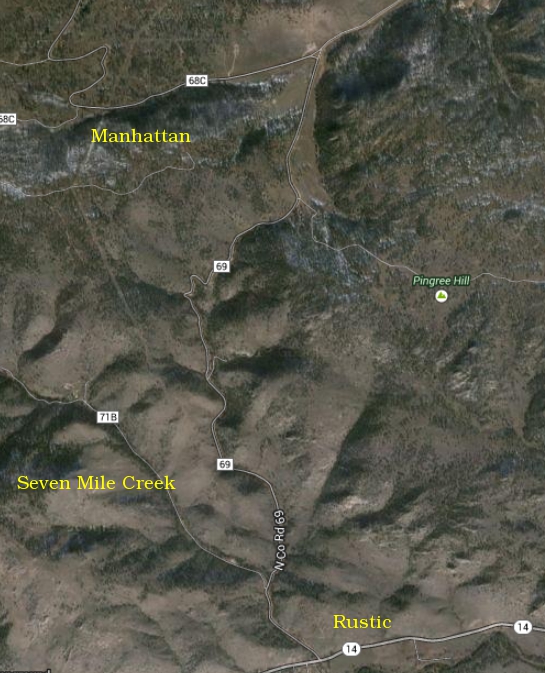 Google map of Rustic and general area.
N Co Rd 69 is the Pingree Hill road. This was first known as Three Mile Canyon, because it is three miles from the confluence with the Poudre River and the top of the canyon. Until highway 14 was built up the Poudre Canyon in the late 1920's, Pingree Hill was the only way to access the upper stretch of the Poudre Canyon.
The junction of county roads 69 and 68C is Goodell Corner. The mining town of Manhattan was where the first switch back on Cr 68C is. You can see the 'new' power line on the left side of the above photo, the 'straight' bare mark.  The area between highway 14 and county road 68 has a lot of old mines and prospect holes. You can find some good specimens of gold ore, sulfides, quartz, and jaspers in this area. Seven Mile Creek  has some placer gold mixed in its gravels.