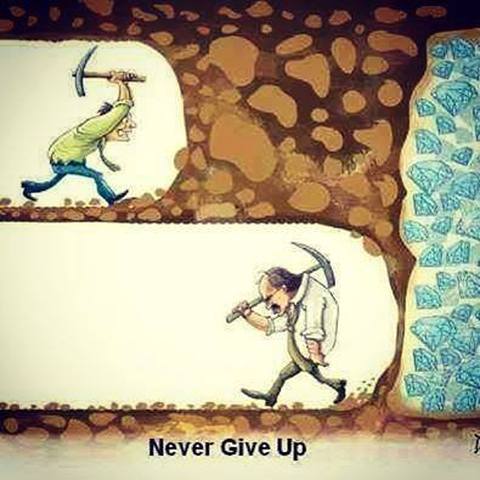 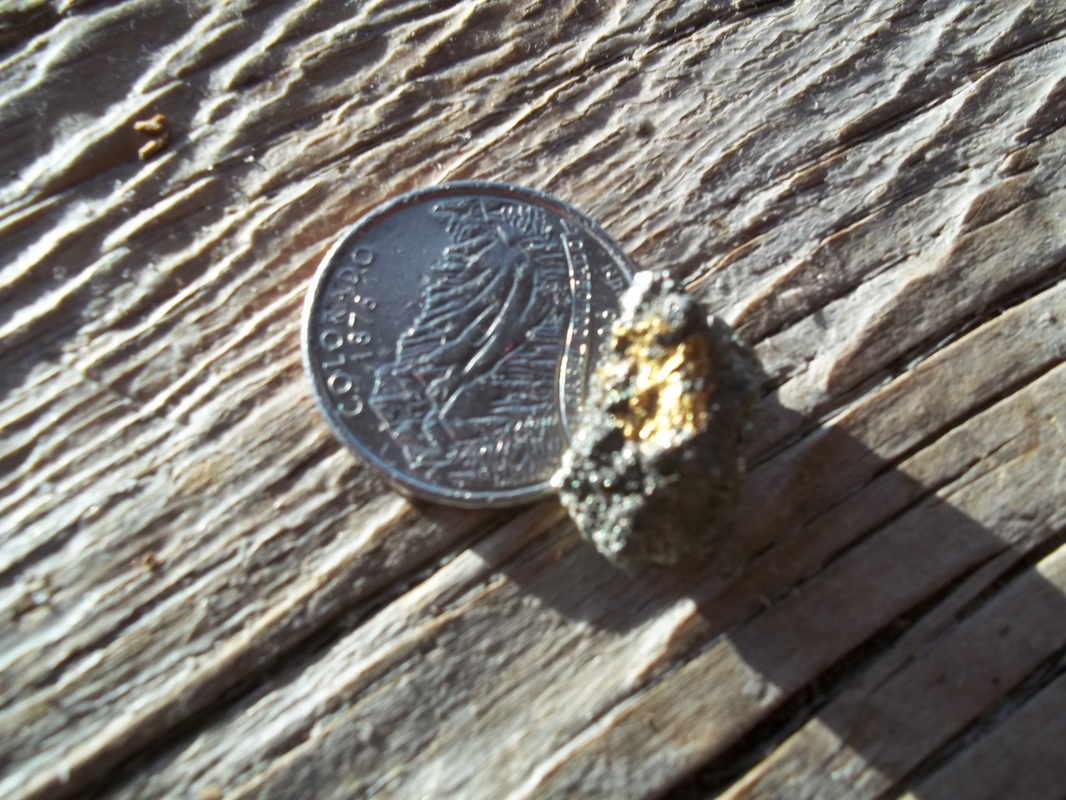 There's gold, and it's haunting and haunting;
It's luring me on as of old;
Yet it isn't the gold that I'm wanting
So much as just finding ......
Prospecting is a whole lot more than looking for gold.
Don't get me wrong I like finding gold,
but there are many other minerals to watch for while out prospecting.
I strongly recommend reading http://gemhunter.webs.com/gold.htm.
Proof the Not all of the gold deposits have been found. 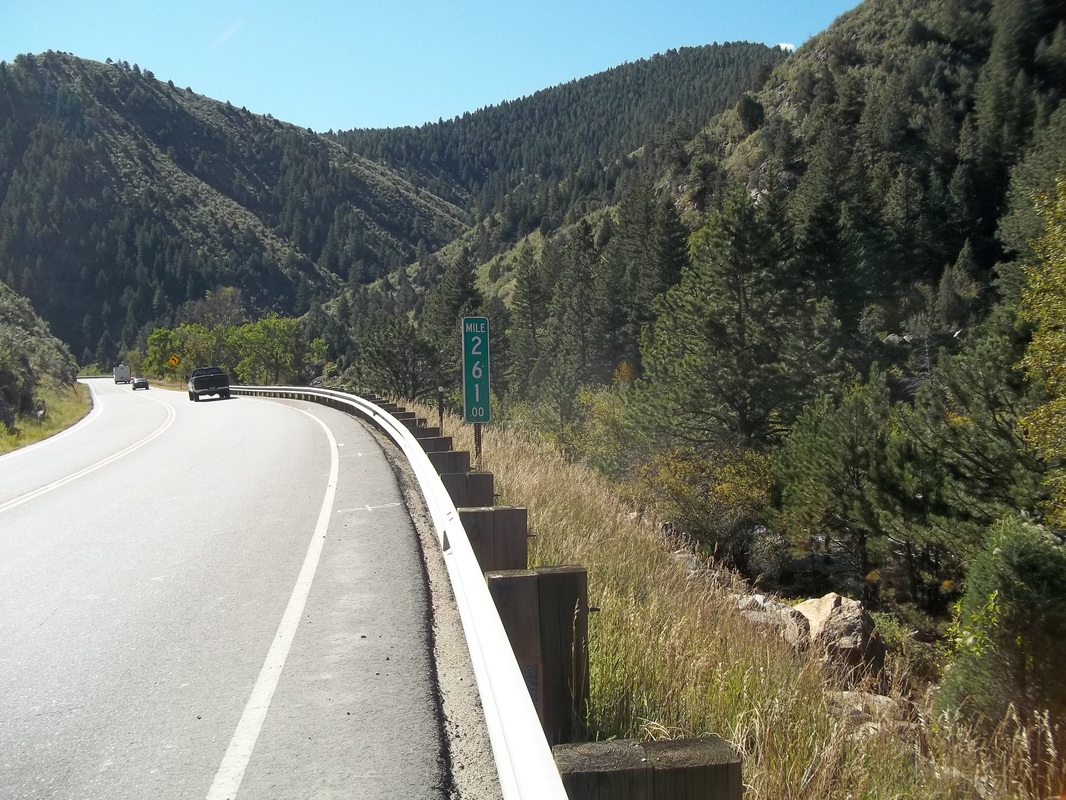 A good place to find gold on Clear Creek west of Golden Colorado.
Over the years I have spent a lot of time prospecting along Clear Creek. I found this one area where in the past  the gravels both above and below had been dredged. The gravels in this area were not dredged for some reason. This is a gravel bar where I find gold in every pan - if the sample is taken from the rusty - reddish layer of gravel. 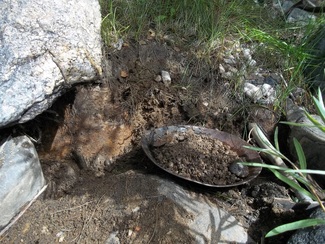 An example of the gravels in this gravel bar, we found gold even in the roots of the grass. The large nugget escaped on this trek, but I know it is there waiting.
I was amazed with the change of this gravel bar- the flood last September moved a lot of the material and changed the main channel of the creek. This is still am area where I find gold. 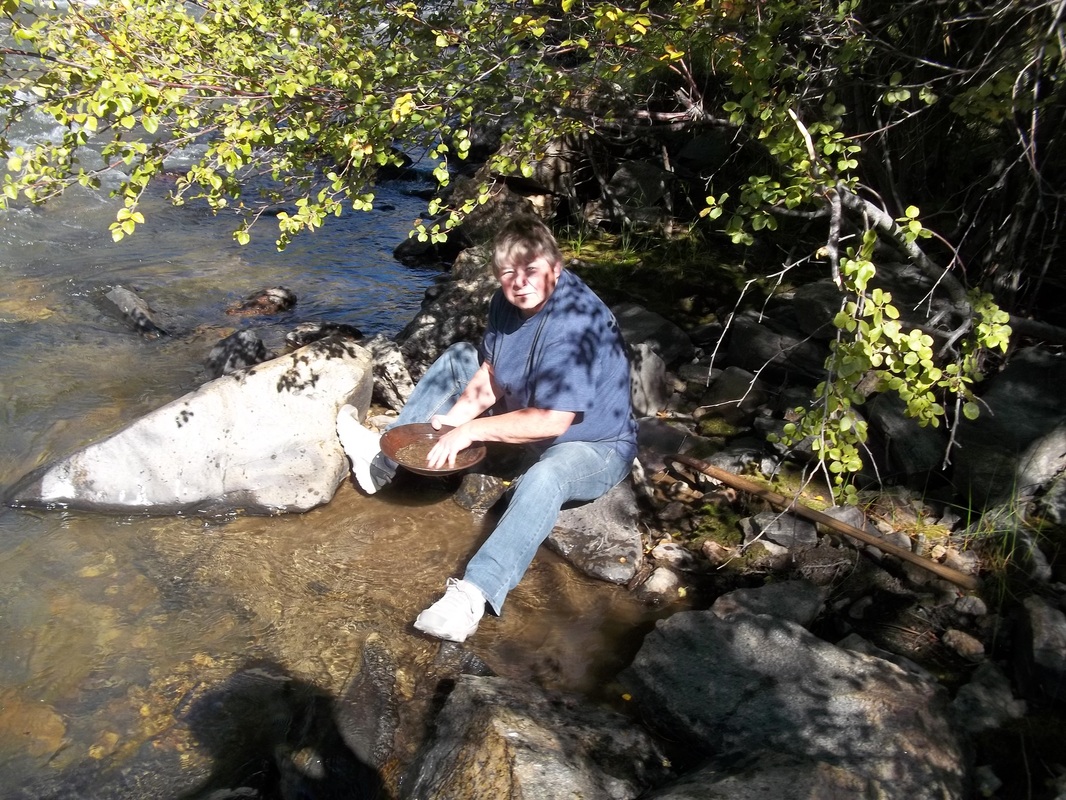 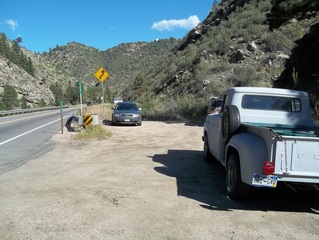 A good place to park to explore.prospect this hot spot. You can walk under the highway through a cement culvert then head down stream to the gravel bar. 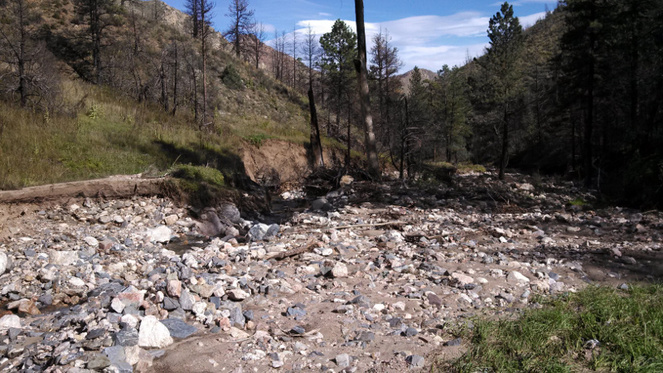 Photo by Jack Brinkhoff
Skin Gulch - west of Fort Collins up the Poudre - south of the Poudre - west of Stove Prairie road.
In September of 2013, the front range of Colorado experienced unusual heavy rain storms, resulting in flash flooding of the numerous drainages. These creeks and rivers drain the mountains that contain many minerals, such as Gold, Silver, Platinum and others.
As devastating as the  floods were, mother nature has re-concentrated millions of tons of gold bearing gravels. Due to the high specific gravity of gold, (gold is ~19 time heavier than water)  these flood conditions have washed it from the gravel bar where it was and  redepositing  it in high concentrated volumes in new gravel bars. The heavier materials will be deposited together.
All of the drainages  from the known gold producing districts affected by these flood have new gravel bars that could contain gold. Such as Clear Creek west of Golden Colorado.
When prospecting the new gravels, you want to look in the rusty - red stained gravels first. These gravels contain the heaver  material including gold. You should get a lot of  "black sand" in you pan. Find the gravels that have larger cobbles, big rocks. Although the iron has been deposited in the sand, the sand would have only very fine gold in it. The bigger nuggets will be mixed in with the larger cobbles.
The record high-water of these recent flood  will have exposed ancient gravel bars that were not previously found. Pay attention to how the channel of the creek has changed. Look for areas where it has eroded new ground. Hundreds of mine dumps have been washed away, gold from these old mine dumps will be found in down stream gravel bars, along with numerous other minerals and artifacts.
If you prospect a creek that has recently experienced flash flooding, like Skin Gulch, you will have to have a bit of luck. The flooding has moved tons of gravel, concentrating the gold in new places. Keep in mind that gold is heaver than most of the other minerals. The normal iron stained - reddish - gravels might not have had time to form. Gather gravel from between large cobbles to test pan. Keep looking don't give up. Look at the new exposed areas along the side of the creeks.
Next summer will be a exciting summer for prospecting. Even if you don't find a lot of gold you will have a enjoyable time playing in the water.

Prospecting is the physical search for minerals, fossils, precious metals or mineral specimens. Prospecting is physical labor involving hiking, panning, and the investigation of outcrops looking for indications of mineralisation.

The most important piece of prospecting equipment you own is that grey matter separating your ears.

Evaluate the geology of where you are prospecting. Slow down and take time to  consider all possibilities.

My main philosophy when prospecting is if a rock catches my eye and I like it, I take it home. Often this creates a problem of my collection bag getting too heavy. I'll sit down, roll me a cigarette, and look over the collection, I stack up the rocks that I have to get rid of to lighten my load, and pick them up another time.

Most of the time after returning home from a trek I think OH I wish I had taken a picture of that campsite, why didn't I take a photo from the top of that pass, why didn't I bring those numerous rocks home. Amazing how hind site is so good.

Known gold producing creeks:
Clear Creek - west of Golden this area experienced higher than normal runoff in the fall of 2013 - this reconcentrated the gold bearing gravels - I would start just west of Golden - work my way up the creek test panning...
Left Hand Creek - west of Boulder another creek that was flooded in the fall of 2013 Gold has been reconcentrated
Kaufman Creek - I have found gold from the confluence with WIllow Creek up stream for over two miles
Gold Run - almost all of the gravel bars
Denver Creek - in the majority of the gravel bars
Stillwater Creek -west and north slopes of Gravel Mountain west of Grand Lake
Douglas Creek - north-west of Fox Park Wyoming
I have found gold in the gravels of these creeks.
My favorite spot is Independance Mountain in North Park, west of Cowdry.
In all of these locations the gold is in layers of gravel that is rusty looking -red to yellow - high iron content. Although I have found a few nuggets the majority of the gold is very small fine flour gold, but it all adds up.


Copper King MIne in the Silver King Mining District of Wyoming
This mining district is west of Cheyenne Wyoming. 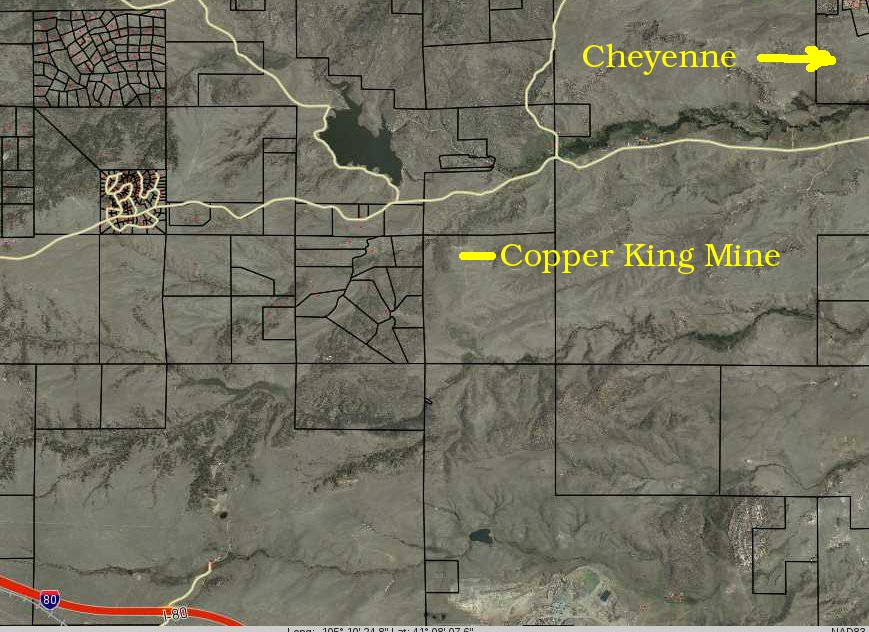 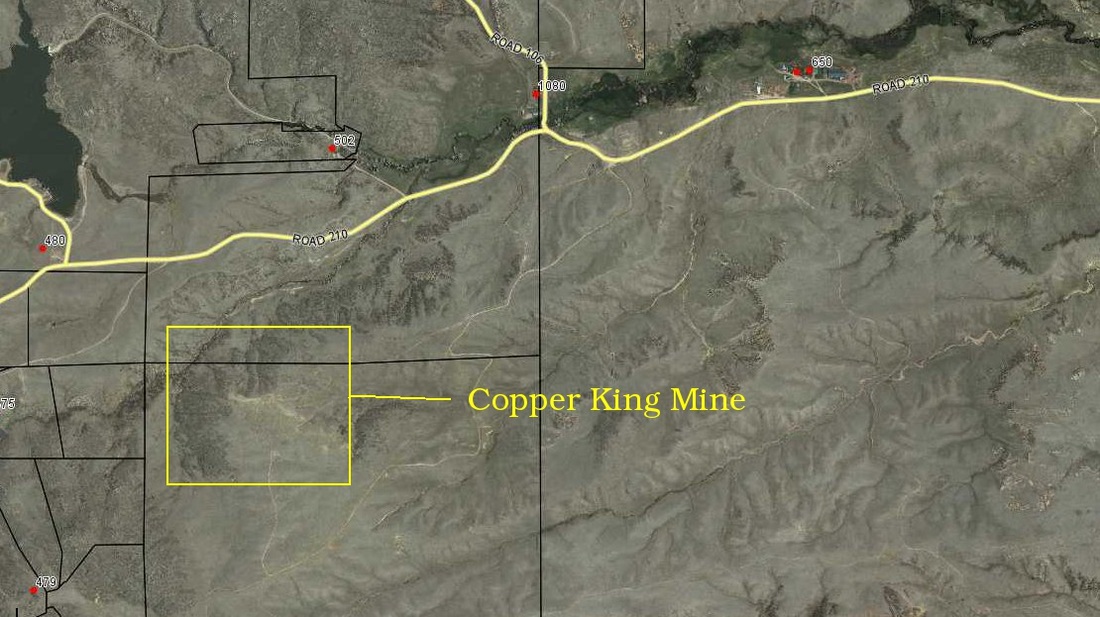 Location of the Copper King Mine
I often hear the remark that the majority of the gold has been mined out. This is one example where this statement is false. Our once great nation has a vast reserve of minerals that we are not mining.