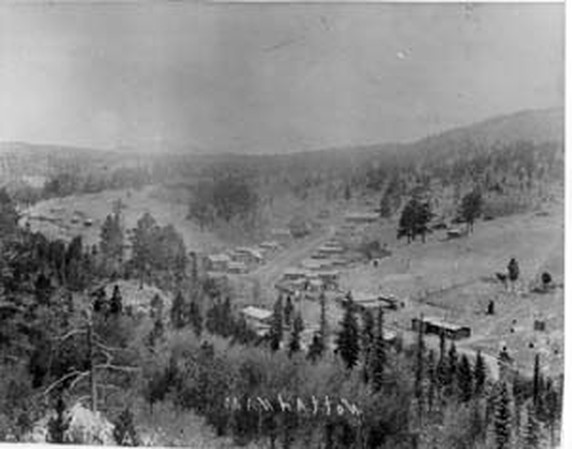 The above photo was taken from the ridge southeast of the camp, looking towards the northwest. The nation was suffering hard times during this era, business was slow, it was a struggle to make a go of it. The city fathers of Fort Collins wanted more people to move to Larimer County so they promoted the exploration of the mineral wealth of the county.

In the April 8th 1886 issue of the Fort Collins Courier I found this blurb:
" There is untold wealth in the undeveloped resources of Larimer County. Some day in the near future the requisite capitol and enterprise to bring this wealth to the surface will be forthcoming and then the cry of hard times will no longer be heard within our boundaries."
The writer of this article knew, unlike far to many today,  that the only source of wealth is the ground, you either mine wealth or you grow wealth.
Possibly in answer to this blurb, or perhaps before the article was written, a group of men formed a committee to help search out the unfound mineral resources in Larimer County.
The members of this committee were:

The committee first  meet during the evening of May 5th 1886 in the offices of Ballard and Robinson. Abner Loomis was chosen as chairman and T. M. Robinson was appointed secretary.
The committee agreed to:
" We the understand agree to pay $5.00 per month for four months, commencing May 10, 1886 for the purpose of keeping two prospectors at work in the mountain districts tributary to Fort Collins; said prospectors to receive a one-fourth interest in any claim they may discover and the subscribers to this fund the remaining three-fourths interest."
This proposition was put out to bid. The committee received six bids. John DuBois was the lowest bidder and was awarded the contract to prospect for the committee in the mountains west of Fort Collins. "


Mr. DuBois discovered paying gold placers on a tributary of the Elkhorn, which was later named Manhattan Creek. This discovery was reported to the committee  in early September of 1886. Further prospecting by Mr. Dubois led him to the lode source of the gold.

In September 23ed issue of the Courier is an article talking about the discovery of GOLD on the Upper Elkhorn Creek.
" Prospectors and speculators are rushing like mad to the region of the upper Elkhorn. It is the magical word, "GOLD", which is attracting them. It has been only four or five days since the announcement was made that a few prospectors thought they had good indication of the presence of the yellow metal in the foothills  near the Wyoming line and it is now reported that there are no fewer than two hundred persons on the ground.
Fort Collins people are wild over the reporting of finding gold in the Elkhorn country about fifty miles from FOrt Collins. Well why not find gold there? it is true it is beyond what has been considered the ore-belt of Colorado, nothing having ever been found north of Long's Peak, but then the Rocky Mountains are an enigma anyhow and one need be surprised at nothing. Book geology has had to be revised several times since Colorado became better known and it may need another revision.
Reports of the most encouraging character continue to come in from the new goldfields of Manhattan and Elkhorn creeks. New discoveries are being made every day and the camp is alive with prospectors and others drawn thither by the magical word GOLD. Several placer claims have been located during the last week which promises to yield good returns to their intrepid locators.
George GIll came down from camp Tuesday; bring with him several sacks of ore from different parties, which he sent to Boulder to be sampled. Mr. Perry Bosworth sent a small specimen of ore from one of his claims to Denver on Monday to be assayed, the return showing that the ore carried a fraction over $25.00 in gold per ton. This specimen was form the surface and is considered good enough to warrant Mr. Bosworth in pushing development work as fast as possible on his claim.
The town has been named Manhattan and already contains a number of buildings completed and underway. Mr George DuBois has built a comfortable hotel and B. F. Burnett's is putting the finishing touches to a store building."

The Fort Collins Mining Company was owned by the committee that raised the funds and hired John Dubois to prospect the hills west of Fort Collins.

Soon the town had it's own section if the Fort Collins Courier, The head Line was
Manhattan Nuggets
items of interest from November 18th 1886
Let the miners of Manhattan take heart and be happy. The business men of Fort Collins are coming to their relief in good shape. A small stamp mill will be put in the camp right away. At a meeting of business men held Monday evening the move to erect a stamp mill at Manhattan began to assume shape.
Mayor Hilton has moved into his new house on Manhattan Street
George DuBois is located in his new hotel and is prepared to satisfy the inner man of all who may come to town.
The printing office is nearing completion and by the 15th of December there will be a spicy little paper published here.
Manhattan's newspaper was named "The Manhattan Miner".


Three Cheers and a Tiger for Manhattan
She is destined to boom in the near future... 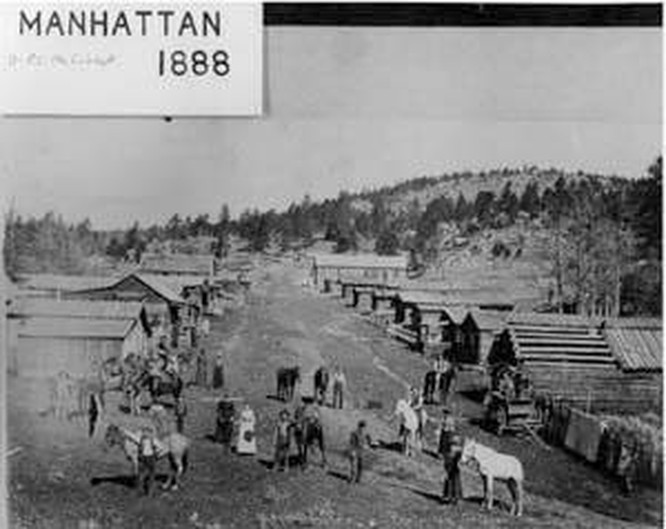 The numerous mines in this mining district did not play out, there is still a lot of mineral wealth to be recovered in this area. Three kimberlite pipes - the diamond bearing blue-earth - are known in the area one of these pipe is on top of the ridge on the sky line on the right hand side of the above photo. 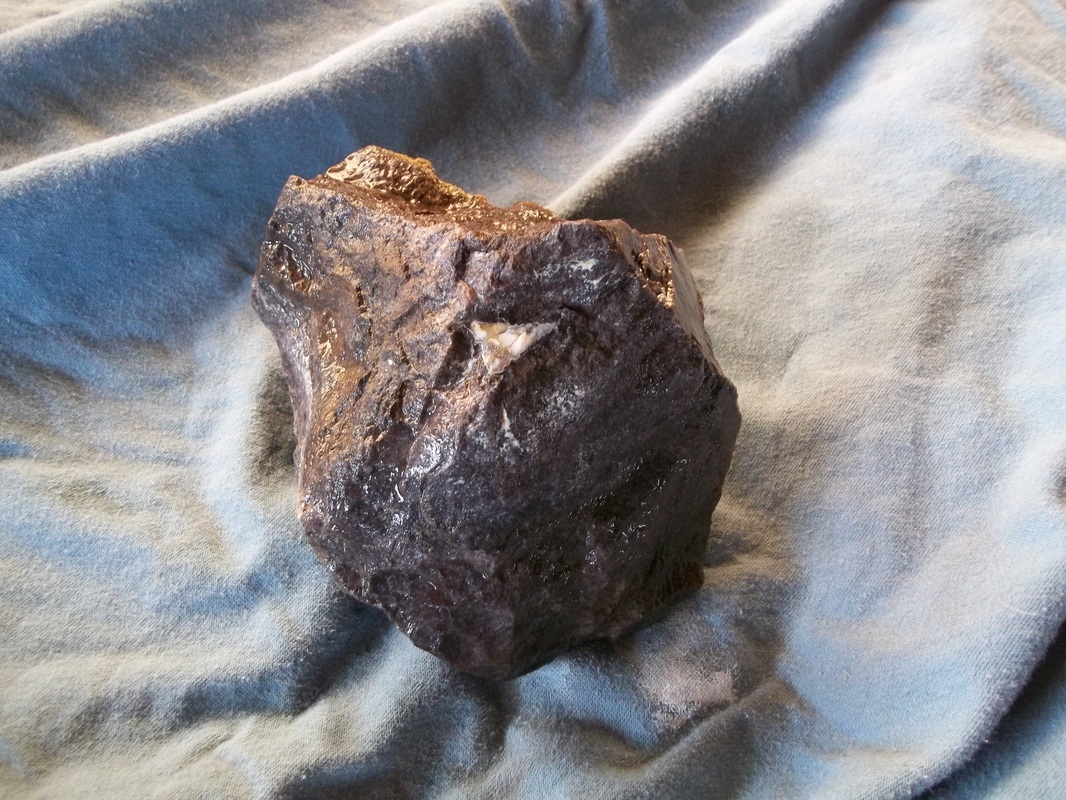 A specimen of Corundum found in the Manhattan District. The gemstones Ruby and Sapphire are varieties of corundum. More prospecting is needed.
In the photo below is a variety of Feldspar similar to Oregon Sunstone that was found in the Manhattan area. This polished gem was appraised at the value of $525.00 by a Fort Collins gemologist. 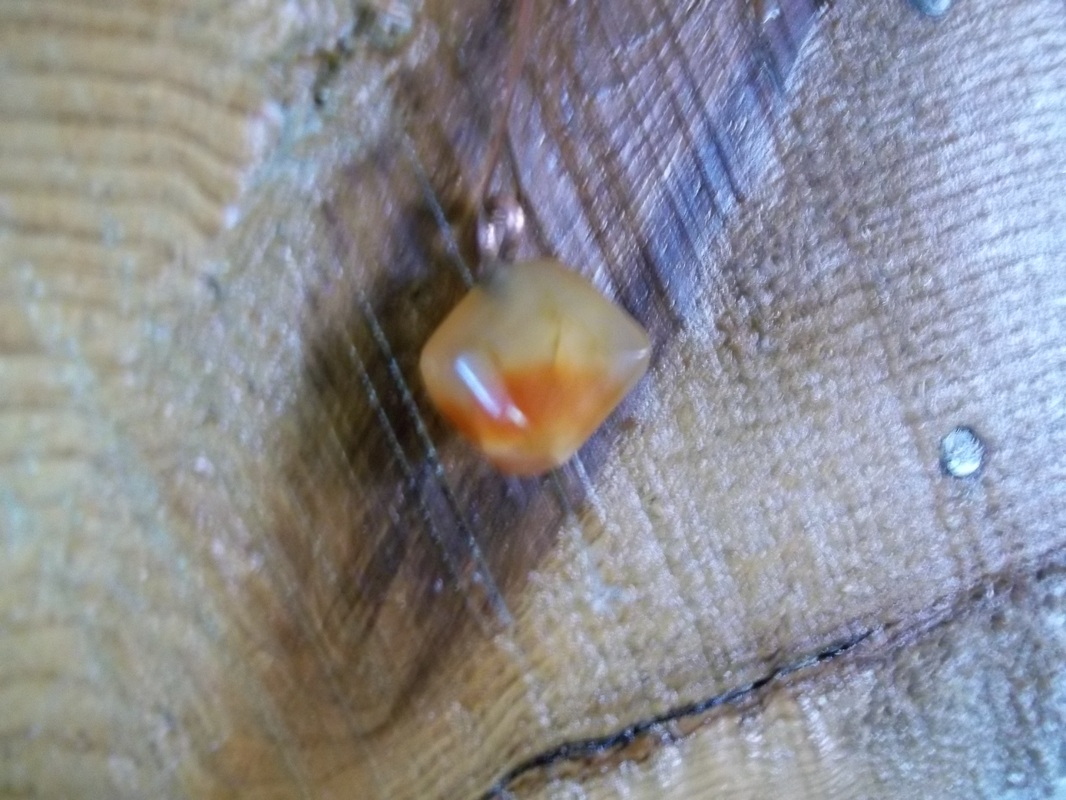 The early day miners were only interested in the metallic minerals - gold, silver and copper.  The photos below are three different cabochons made from rough found in the area.